Do It Yourself: WSR Land

I have day-dreamed of having a DIY spot for a long time.  When I was growing up I was lucky enough to live in a home with an abnormally large yard to skate and I was able to build a lot of things out of wood, metal, and whatever I could find.  Those rails and ramps were wonderful, but an opportunity to create something more permanent out of concrete didn’t come around for thirteen years.  Well, I had one chance but I didn’t know what I was doing and it sucked.

The beginning of WSR Land was actually way back in 2007 during Calavera’s Prescott Poker Run on Go Skateboarding Day.  We were all meeting up in a parking lot, but next to that was an area where a building recently burnt down.  Amongst the ashes, there was a slab of smooth concrete, so we started skating flatground on there waiting for the Poker Run to begin.  Then someone found a nice sized piece of wood and we propped up up against a brick structure (seen broken down to half the size on the left side the picture below) and suddenly we made a bank to skate.  We sessioned that for a short time and I thought of how cool it would be to make a DIY spot there.

Flash forward around seven years later and my friend Dylan walked by the same spot and had the same idea.  Realizing nothing had happened there for that long, I started to think we just might get away with it.  We started small, brought some curbs and other little skateable things, and then we just waited so see what would happen.  A while went by and no one seemed bothered, so we slapped some concrete against a parking block to make a tiny quarter-pipe.  After that things went smoothly, and then suddenly someone brought a wooden quarter-pipe and placed it at one end.  We had no idea who did it, but soon we all had the same thought; make it concrete.

Once we discovered who brought the ramp we asked him if we could tear it apart and use it as a form, and he was just as stoked as we were.  It was at that point my first real concrete project began, and I enjoyed every moment of it from planning to pouring.  My greatest contribution was finishing out the back-fill shaping with some debris and bricks that were laying around, many of which were from taken from where we made the bank years ago.  It wasn’t easy but it also wasn’t too hard.  More importantly, the end result is fun to skate! 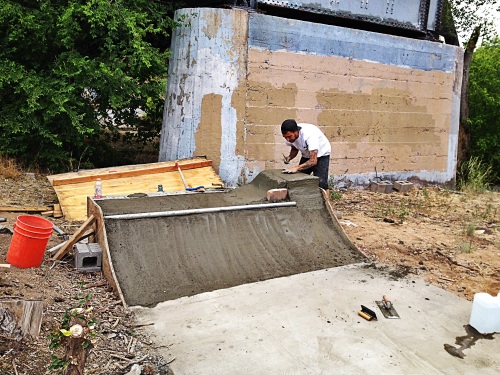 Without any technical permission it was a risk, but we needed to see what we could get away with.  It has been over two months since we created the quarter-pipe and there hasn’t been any trouble.  The police have even come several times and said as long as they don’t get any complaints they don’t mind.  It was one of few occasions I wasn’t kicked out of a skate spot when the law arrived, and that made WSR Land even more amazing.  Now we are beginning the next phase of building and this will push the boundaries of how much we can get away with.  By adding more visible alterations it ups the chance of getting busted, but the magic makes  it worth the risk. 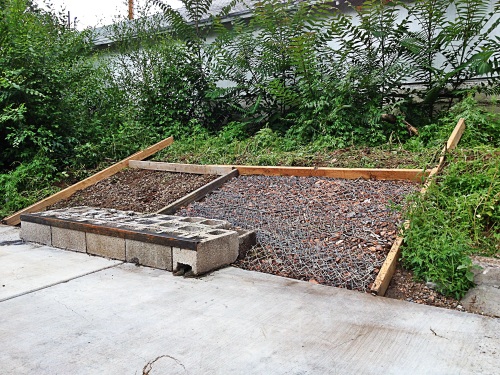 Here is another post I did about DIY skating.

One response to “Do It Yourself: WSR Land”